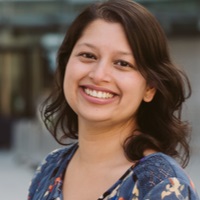 Nina Goswami is Clifford Chance’s first Head of Inclusion UK. She is responsible for developing and implementing the global law firm’s inclusion policies and campaigns within the London and Newcastle offices.

It is the biggest ever collective action on increasing women’s representation in BBC content. During Nina’s tenure, 50:50 expanded beyond gender to drive change in relation to disability and ethnic minority representation too.

As part of the BBC’s Creative Diversity Unit, she led their work around inclusive language and supported BBC News with its diversity and inclusion strategy. She also launched impact-driven partnerships such as Reframing Disability with the Media Trust.

Nina also worked as a journalist. She was a reporter for national newspapers – The Sunday Times and The Sunday Telegraph – as well as for the legal press. This was prior to her work at the BBC, where her roles included TV News Editor. During the coronavirus pandemic, she returned to the BBC newsroom as a TV output editor and senior producer to support critical news services.

Her work to create culture change through data-driven initiatives was recognised at the Women in Governance, Risk and Compliance Awards 2021, where she was short-listed for GRC Ambassador of the Year. Nina has also featured in the Top 20 Global Diversity List as a Champion 2021 and Diversity Professional 2020.