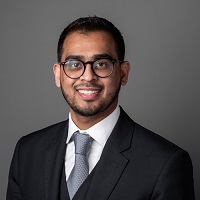 Kawsar is a barrister, solicitor (non-practising), and a CEDR Accredited Mediator. He enjoys a diverse practice working on matters spanning from civil and commercial to regulatory, employment and public law. He has appeared before a range of courts and specialist tribunals and is regularly instructed in complex matters, often beyond his level of call.

Before becoming a barrister, Kawsar was a solicitor at ‘Magic Circle’ law firms Clifford Chance and Allen & Overy in London, where he specialised in financial services regulatory law acting for some of the world’s largest corporate and financial institutions on a range of high-profile, international and cross-border matters. He also worked on high-value international commercial arbitration and mediation matters, complex banking and finance transactions, and in forming private funds.

He is passionate about the law, legal practice, diversity and social mobility. He holds various unpaid leadership roles including as a Trustee of the Wembley National Stadium Trust, a Governor at Morpeth Secondary School in East London, and an associate member of the UK’s National Muslim War Memorial Trust, which is supported by Her Majesty’s Government and the Chief of the Defence Staff. In 2020, he founded the ‘Take the COVID-19 Vaccine Campaign’ to encourage vaccine update amongst BAME communities and was praised in Parliament.

As the youngest of seven siblings, Kawsar was the first in his family to go to university. He graduated with first in law from the London School of Economics (2HC Scholar), before completing the BCL at Oxford University (OCIS Scholar), and then the LLM at Harvard Law School (Fulbright Scholar). In 2009, he was a Global Fellow of the Prime Minister.