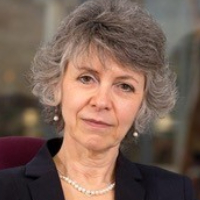 Alexandra qualified as a solicitor in 1983, and was an equity partner at Linklaters (1990-2003). She now sits as a Deputy High Court Judge, Recorder and fee-paid First Tier Tribunal Judge. She is also the Independent Statutory Reviewer of Access & Participation Plans for the Office for Students, appointed by the Minister for Universities for the Department for Education.

Throughout her career, Alexandra has been keen to mentor and support young women, especially those within the legal profession.

Alexandra is currently a Council member of JUSTICE (the law reform and human rights organisation); a trustee of LawCare (the mental health and wellbeing charity for the legal professions and judiciary); and Chair of the trustees of Discover, Children’s Story Centre based in Newham. Formerly, she chaired Amnesty International Charity Limited; JUSTICE’s Executive Board; the Law Society’s Law Reform Board; and Prisoners’ Education Trust.

Alexandra received the Law Society’s Lifetime Achievement Award in 2016; was honoured with a CBE in 2017; and appointed an Honorary Fellow of Brasenose College, Oxford in 2018.